This is our 4th year of trout in the classroom and we at GMS are so excited!  Currently there are two tanks set up for our 6th grade science students to take care of.  Below you will find a weekly updated account of our classroom tank.  We hope you enjoy following along as our trout get ready for the AuSable! 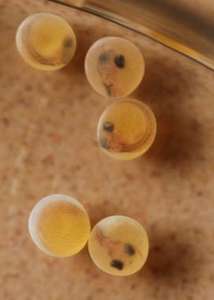 On Tuesday January 29, 2013 our trout arrived from Cedarbrook Trout Farms in Harrisville, Michigan.  The students were really excited as members from the Mason Griffith Founders Chapter of Trout Unlimited delievered them.  Something interesting happened on the way over-all the eggs hatched!  It was a little surprising to say the least!  We started with 500 of what we called alevin.  They still have a yolk sac so they don't have to be fed yet.  Through this first week, the students only lost 5 alevin.

To the left is what the eggs would have looked like.  You can see two little eyes that are those black dots.  This is why they are called eyed eggs. 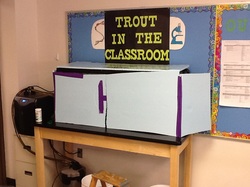 Alevin are getting a little bit bigger.  We still have to keep the cover on because they are light sensitive (photo sensitive).  We have had some bigger loss this week with about 27 not making it.  It has been very interesting having the students pull out the dead alevin and do the chemical tests on the water.  We have to make sure it is as clean as possible. 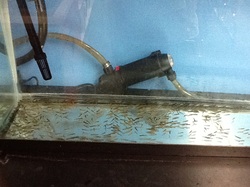 This week was interesting.  On Monday Mrs. Wilkinson had to be gone for the afternoon and while students were checking the water conditions, it was found the nitrates were getting high.  Thankfully Mr. Whittaker helped out by doing a water change.  If fish get to much nitrate they can become sick and possibly die.  This is why everyday we need to check on the fish and make sure that the levels are under control.

Good news this week-our cover can come off so now we get to see the fish!

And for some "unique" news:  our tank has a two bodied fish!  He (or she) is in the picture below.  See if you can spot it! 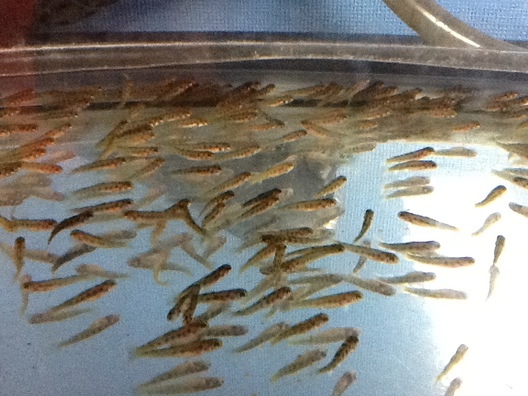 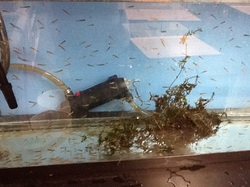 Things are looking pretty good but we still have a high nitrate level.  So, we have decided to get some water plants and put them into the tank, hopefully this will help use up the excess nitrates and put more Oxygen into the water.  Here is hoping!  They seem to like it and it gives them some great practice on hiding when they get to the river. 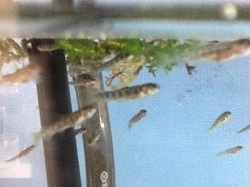 What a week this has been!  It has been so amazing to watch the students take full ownership of the tank.  They are learning so much and are always eager to watch the fish -when their work is done :0)
We are still having a small nitrate problem but it is coming down.  The students are recording the numbers and are making sure that things are not getting worse.  We really think our river plants are helping.  The river plants themselves are greening up quite nicely as well.
A big milestone happened this week!  We are now feeding the fish.  We feed them early morning, mid-morning, and late afternoon before school is out.  There seems to be no excess food in the tank so we know they are eating all of it.

On a sad note, it seems our two-headed fish "bob" is no longer with us.  We have really enjoyed having him here in the tank.  Originally we were going to take him out and preserve him but the students voted to let nature take its course.  While Bob is no longer with us, he taught us alot and was the topic of many discussions about nature and survival. 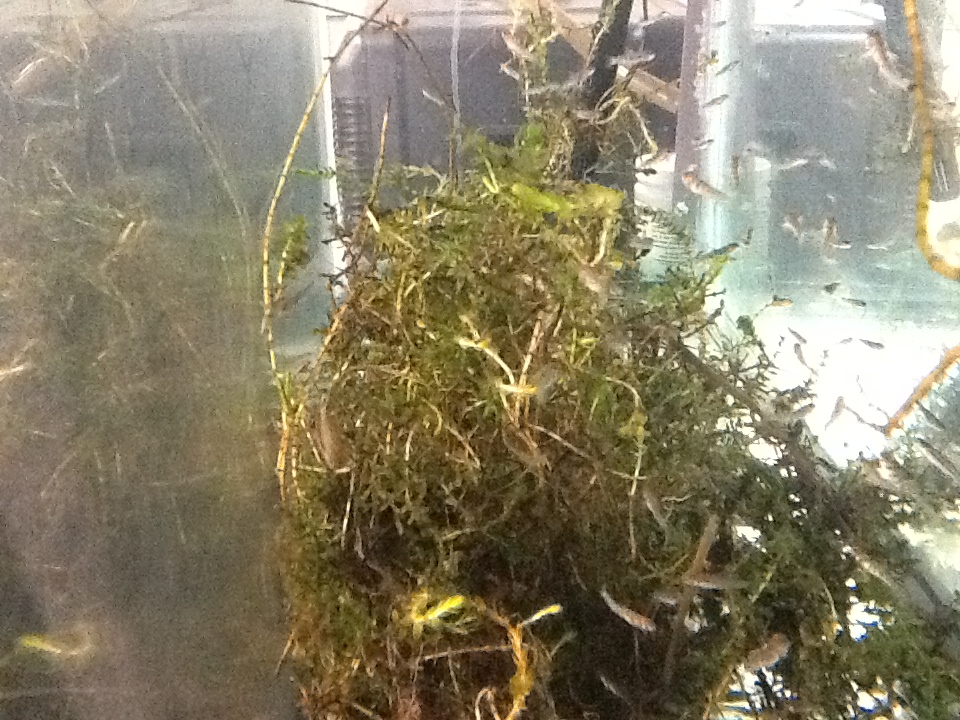 Things are going great!  The students are really loving the trout being here and everyday there are groups of them that go back and watch.  They are really taking a great ownership of the trout as well.  When I (Mrs. Wilkinson) had to be gone at the end of this week they were very concerned about the pH being a little high.  They had another teacher call me to tell them what to do-I was so impressed that they took charge.  This reflects well on their care of the tank.  Please click on the link below to see a video of our fish.
Video of our trout

This week has been pretty interesting.  The trout have been growing like crazy and everyday we are all anxious to see how they are doing.  Again, they are being fed three times per day and are eating all of it.
So, for our science class this week, we decided to learn about what decisions have to be made when planting trout.  We "sampled" 4 streams for the potential home for our trout.  We looked at pH, temperature, turbidity, and dissolved oxygen.  These are all things we look for everyday in our trout tank.  Next, we sampled some aquatic invertebrates that were collected at these stream sites.  It was a great project in getting the students to see what would be a great place and WHY to put the trout.
Happy to report that the AuSable won out!  Looks like that is where our fish should go! 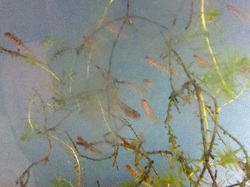 It's been quite a week!  We have been losing some fish, at last count we have lost 21.  They were on the small side but still it seems like alot.  As we have been getting them out of the tank, we didn't see that they had been eaten at all so that means the fish haven't totally started eating each other yet.
Our neighbor Mr. Whittaker has a great tank going as well.  His fish are doing good and things seems to be going ok.  This might be a great year for fish numbers going to the river!
Here are a couple of pictures of the fish getting ready to eat and eating.  They will look to the top and wait.  It is so much fun to watch them swim up and grab their food! 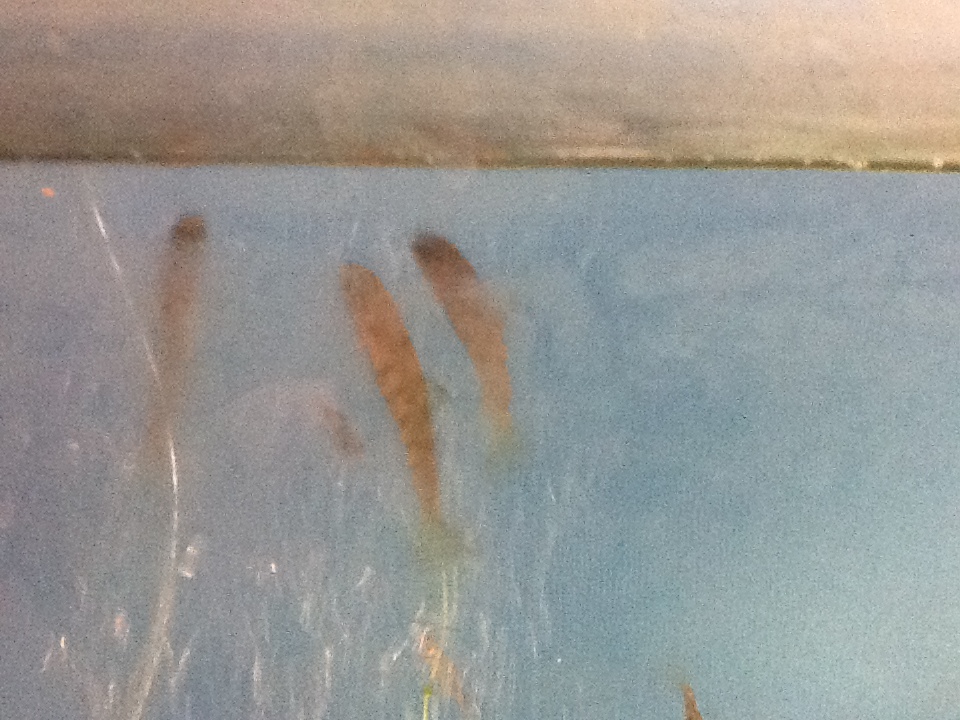 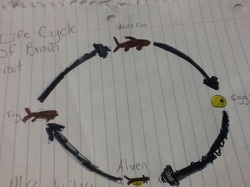 First off, sorry for missing some time there.  We had spring break and time slipped away.  But the fish were checked on quite often during the time and the kids were surprised at how big they were when they came back.
Right now, we have 366 fry remaining.  There have been some days where we didn't have any loss and some when we had quite a bit.  Its been interesting to talk about why that could be and what the students think.
Students love to watch the trout and there will often be 3-4 students up at the tank just sitting there watching.
Below is a video of feeding time!
Feeding Time

We have had a lot of excitement this past week!  I skipped week 12 only because the website provider was down and I could not log in to update.  When we came in on Monday we found that Mr. Whitaker's tank has a "mutant" fish.  There is a horn growing out of its head.  We have been watching it and cannot believe our "luck" this year-first two headed fish and now this.  Funny story about this trout tank was that one of our fellow teachers (Mrs. Stabinski) played a practical joke and put a poster of the X-men behind the tank.  These comic book hero's are famous for being mutants-coincidence??  Either case, check out the picture below to see the "mutant" trout. 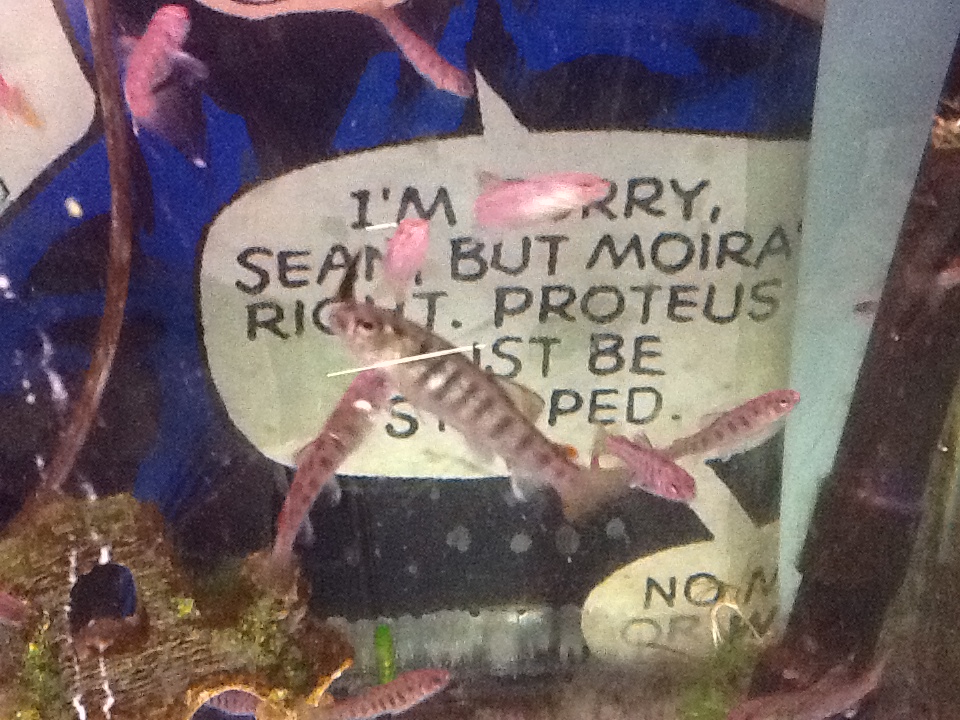 So we still have the "mutant" trout.  We are having some debate on what we should do with him.  We are not sure we want to put the trout in the river.  Oddly enough in class we are talking about invasive species.  Now while this trout is the same species as the other trout, it does have a unique characteristic that causes some question about putting it in the river.  This will definitely be a source of debate this week as we gear up for releasing the trout.  Please check out the video link below to see our unique trout in action.
Great Horned Trout Video